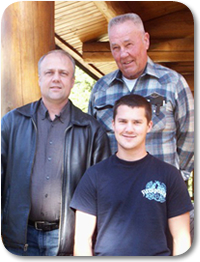 Creasey Log Homes started with Don Creasey in the 1950's. The family owned 30 acres in Monroe and there was an old log cabin on the property which had stood there since the late 1800's. It was in poor condition but, nonetheless, they lived in it for several years. Don's dream had always been to build his own log home and, while living in the old cabin, he, with the help of family and friends, constructed a basement which became the foundation for their new log home. While working to finish the home, Don Creasey had no idea that his dream would not only be realized, but also pave the way for generations of Creasey log home builders and craftsmen.

The Creasey sons Terry and Steve had the opportunity to help their Dad build his home that year. After finishing it, he decided to go into business building log homes for others. Originally called Custom Log Homes, it was later changed to Creasey Log Homes, Inc.  We're well known throughout Washington and have built a very good reputation as "The log home builder" to use in this area.

The story continues, however...

Years later, three generations of Creaseys (father, son and grandson) decided to move the old log cabin to an adjoining piece of property and add on additional square footage. It was quite an involved project in which they started with disassembling the home and reassembling it on the acreage on the other side of the pond. After finishing their new-old home they also built a new office next to the house.

We continue to take pride following in Don Creasey's footsteps, turning dreams into reality in the Pacific Northwest.  Have a project that we can help with? Contact us, we'd love to talk about it with you.